Our screaming day in London.

Changing of the guard.

The men you can see in front of Buckingham Palace who wear a red jacket ,black trousers and a bearskin hat are the Queen's Guard. At the front of the palace there are four Foot Guards, and when The Queen is away there are two.
Foot Guards wear a destintive hat.
-Actually, the hats are made from fur of the Canadian black bears. The British hatmarkers purchose between 50-100 black bear skin each year.
-In the past, they were used to frighten away the enemy because the hats make the Guard look taller.
Everyday at 11.30, they make the traditional Changing of the Guard which is a ceremony where they change over their dutes.
The five Regiments of Foot Guards are:
- The Grenadier Guards.
- The Coldstream Guards.
- The Scots Guards.
- The Irish Guards.
- The Welsh Guard.
I have always wanted to see the Changing of the Guards. When we came to Buckingham Palace there weren't a lot of people, I thought there would be more.
The guards were playing their musical instruments while they were marching on the way to the Palace.
It was fantastic and I liked the music so much. I took a lot of photos.
Natalia. 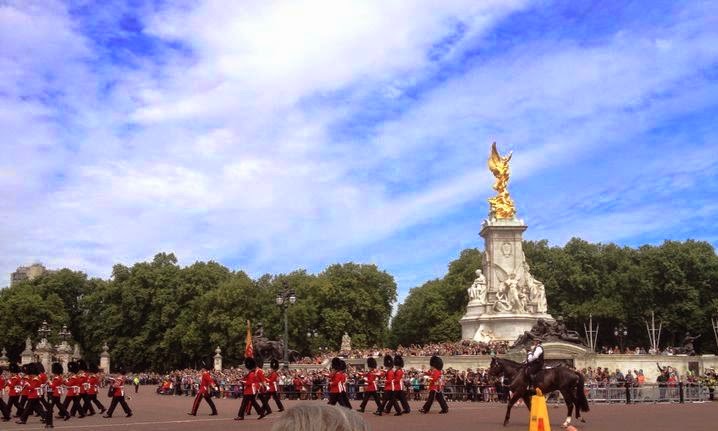 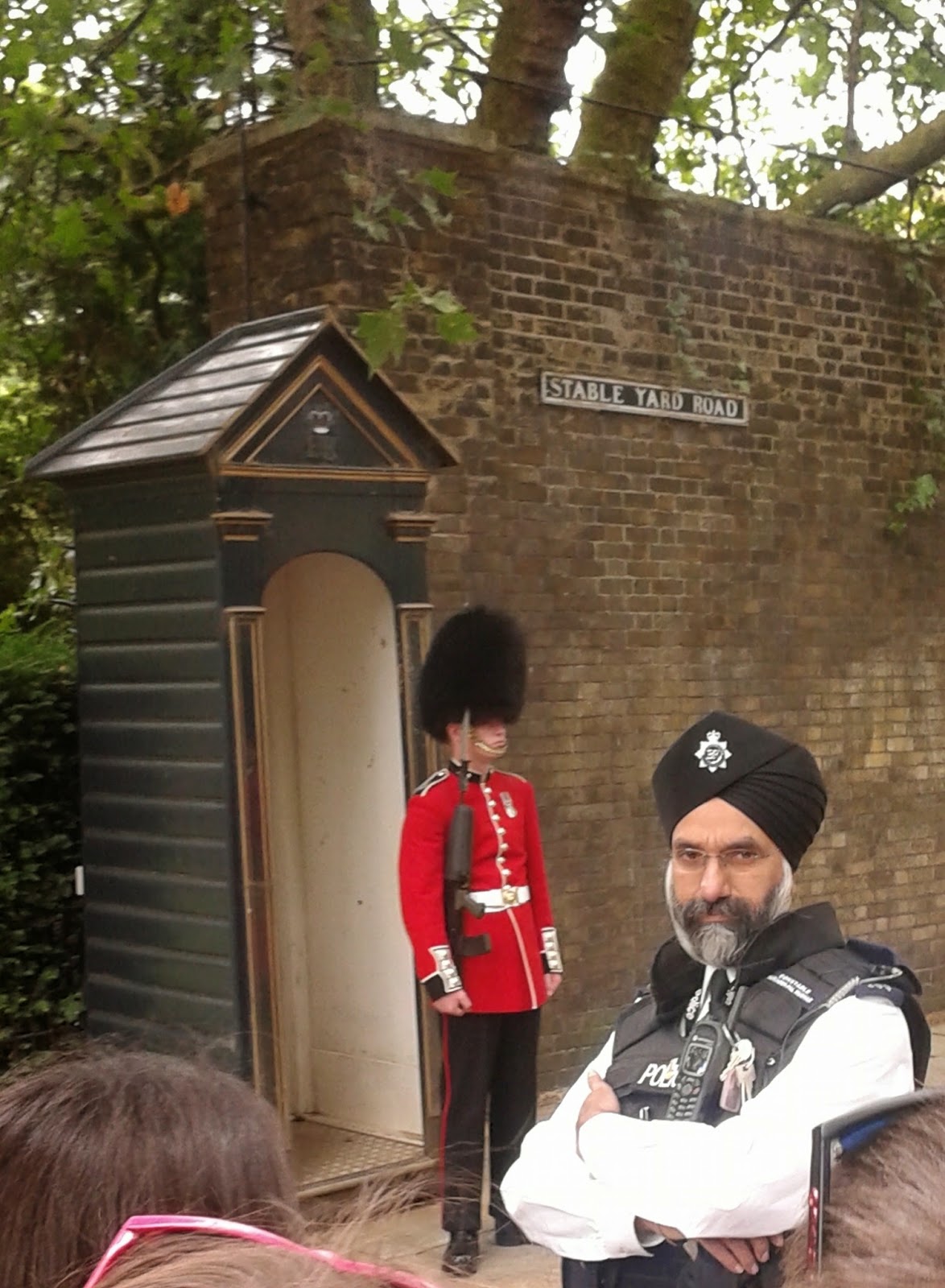 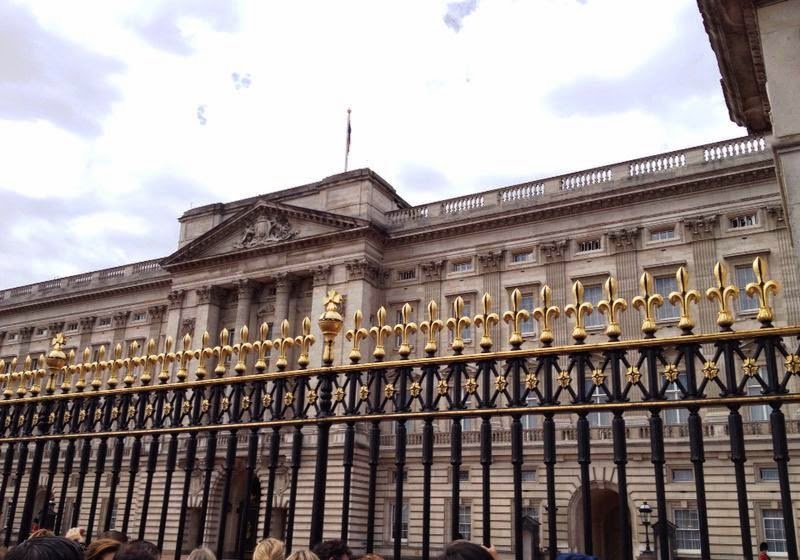 The British History National Museum is a museum in London where people go to learn more about natural history. It is one of three large museums on Exhibition Road in South Kensington.
The museum is enormous. There are five main collections: botany, entomology, mineralogy, palaeontology and zoology with more than 70 million items.
The museum is very famous for its exhibition of dinosaur skeletons.
We couldn't see all the galleries because there are a lot of them. But we saw Dinosaurs and Mammals.
For many, the Naturals History Museum is synonymous with dinosaurs so Dinosaurs are one of the most important and popular galleries.
I really like this gallery because there are a lot of different types of dinosaurs like Pachycephalosaurus, Velociraptor, Triceratops or Tyrannosaurus Rex.
The last one is known as T.rex. It is one of the most popular dinosaurs because it was very strong, big and moves.
Althought T. rex is very famous, my favourite dinosaur is Triceratops.
Triceratops were beautiful and big. They were herbivorous too and they had three horns. I think that they were very similar to that of the rhinoceros.
After that, we went to see the mammals. You can find two parts in this gallery.
In the first part, there are some specimens in glass cases like lions, pandas, horses, etc.
In the second part, there a lot of animals display without glass cases like elephants, rhinos and dolphins, etc.
There is a massive blue whale as the centrepiece. The blue whale is a visitor favourite. It was very enormous with more than 30 metres long.
Finally, we went to the shop in order to buy some souvenir but they are more expensive. We couldn't buy a lot.
From my point of view, this museum is very fascinating. I learnt more about a lot of dinosaurs and mammals. I want to go again in order to see the other galleries. 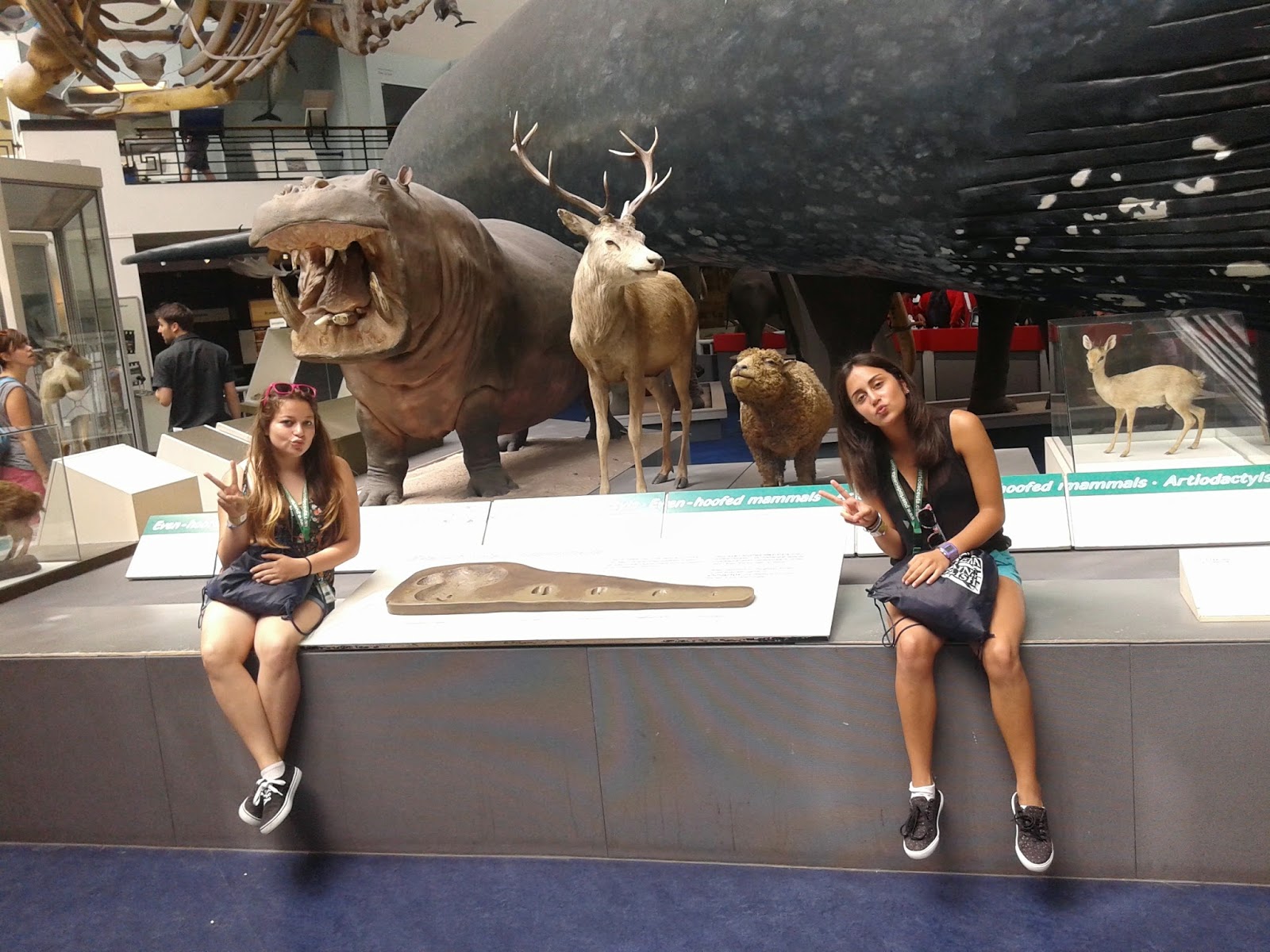 Westminster is a district of central London. It's on the north bank od the River Thames. It's Famous for Big Ben, Palace of Westminster, Buckingham Palace, Westminster Abbey and Westmister Cathedral.
Westminster district is a part of the West End of London. It's also the location of the West End Theatreland área.
The city of Westminster contains Westminster Abbey, Westminster Cathedral, Buckingham Palace, the Houses of Parlament and St. Jame's Palace.
On our tour of London we visited Big Ben and Parlament. I thought that Big Ben was very tall. Parlament was very big and I liked the outside.
Big Ben is the nickname for the Great Bell wich chimes in the clock tower. Big Ben tower is 96'3 metres tall and 13'8 tonnes.
Parlamient which was the home of the king and Queens until 1513, is a very big place near the river Thames and next to the Big Ben's tower. It has two floors. On the first flor, there's the house of the communsand on the second floor, there's the house of Lords. I like the London tour very much because there are a lot of interesting things to visit and sees. 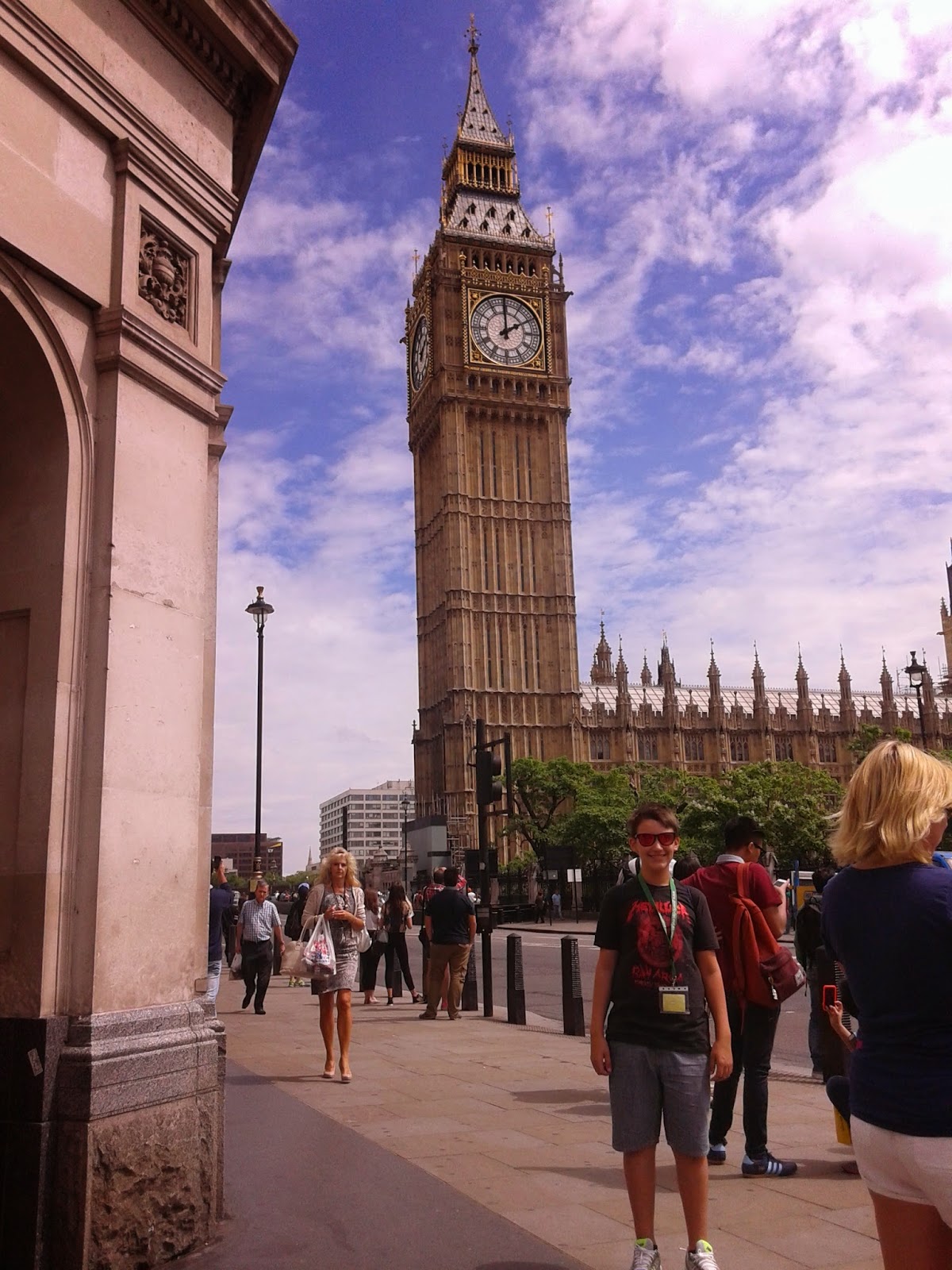 Trafalgar Square s one of the most importanttourist attraction in central London in honour of the british victory by the Admiral Lord Nelson at the battle of Trafalgar. There are a lot of monuments to see, like four big Lions, Nelson's colum or you can see diferent monuments. The famous four lions which guard the square are made from old battleships. Also, there is a big fountain there. There are fourth plinths in the square. One is empty and it change every three months. Now there is one big blue cock that it's a sculpture by the german artist Katharina Fritsch. The cock represents in a humorous way masculinity. The color blue it's typical of the artist painting. The bird is made of fabreglass and it is 4'72 metres high. It's tok two years to make. 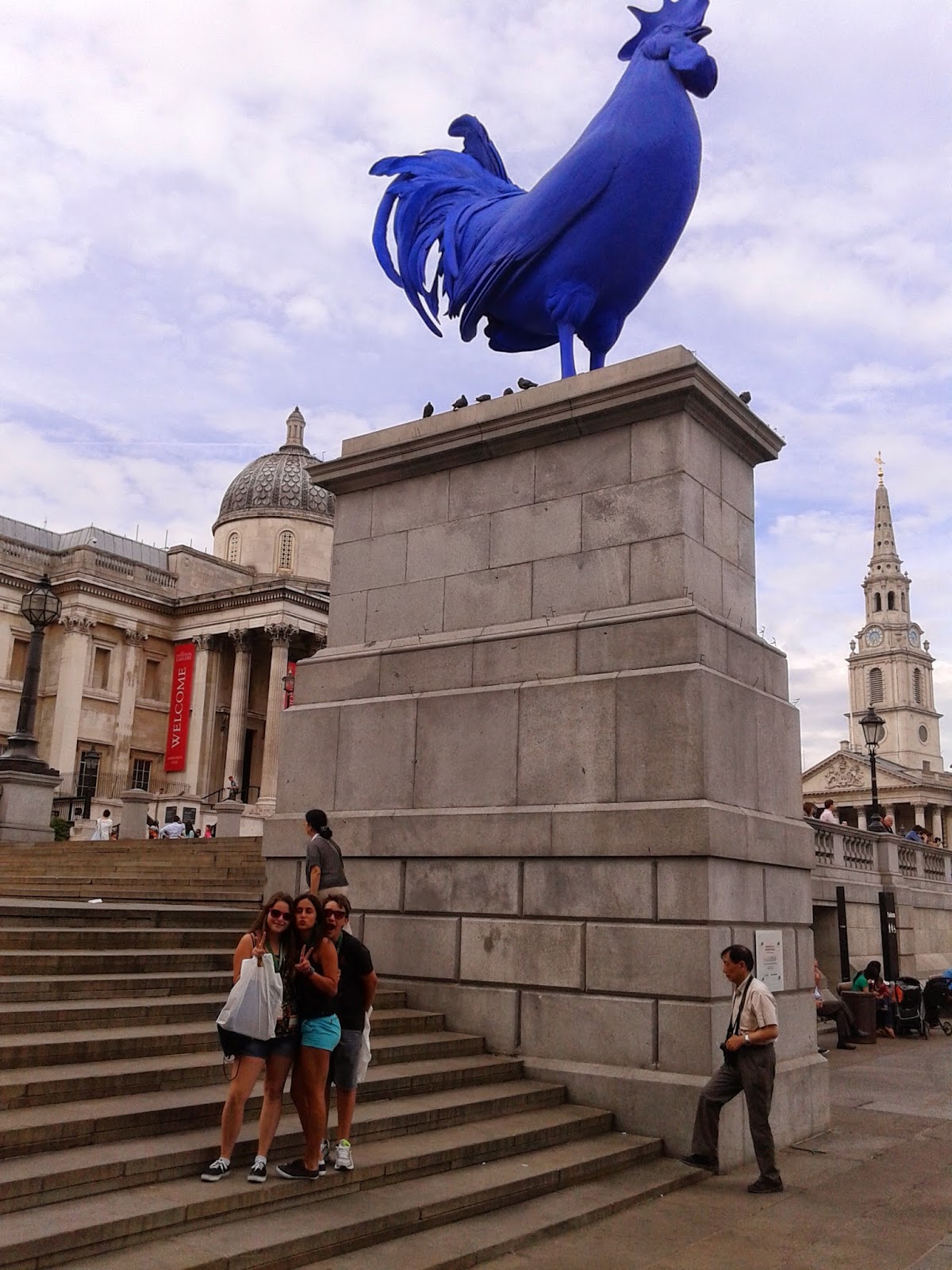 
The London Eye is a giant Ferris wheel.
It stands on the South Bank of the River Thames in London, between Westminster and Hungerford Bridges. It is the world's highest observation wheel. It stands 135 metres high. It was constructed in sections which were floated up the River Thames.
The total wight of steel if the Eye is 1,700 tonnes.
It can carry 800 passengers at a time on a 30 minute ride, 32 people in each capsule.
On the top, you can see a beautiful view of London and take photos.
You get on and off the London Eye while it's moving. It doesn't stop.
I thought that I would be scared of heghts.
When I was at the top I saw the view and I took photos. On the way down a big camera took a photo of us which I bought in the souvenir shop. It was an amazing experience.
Natalia. 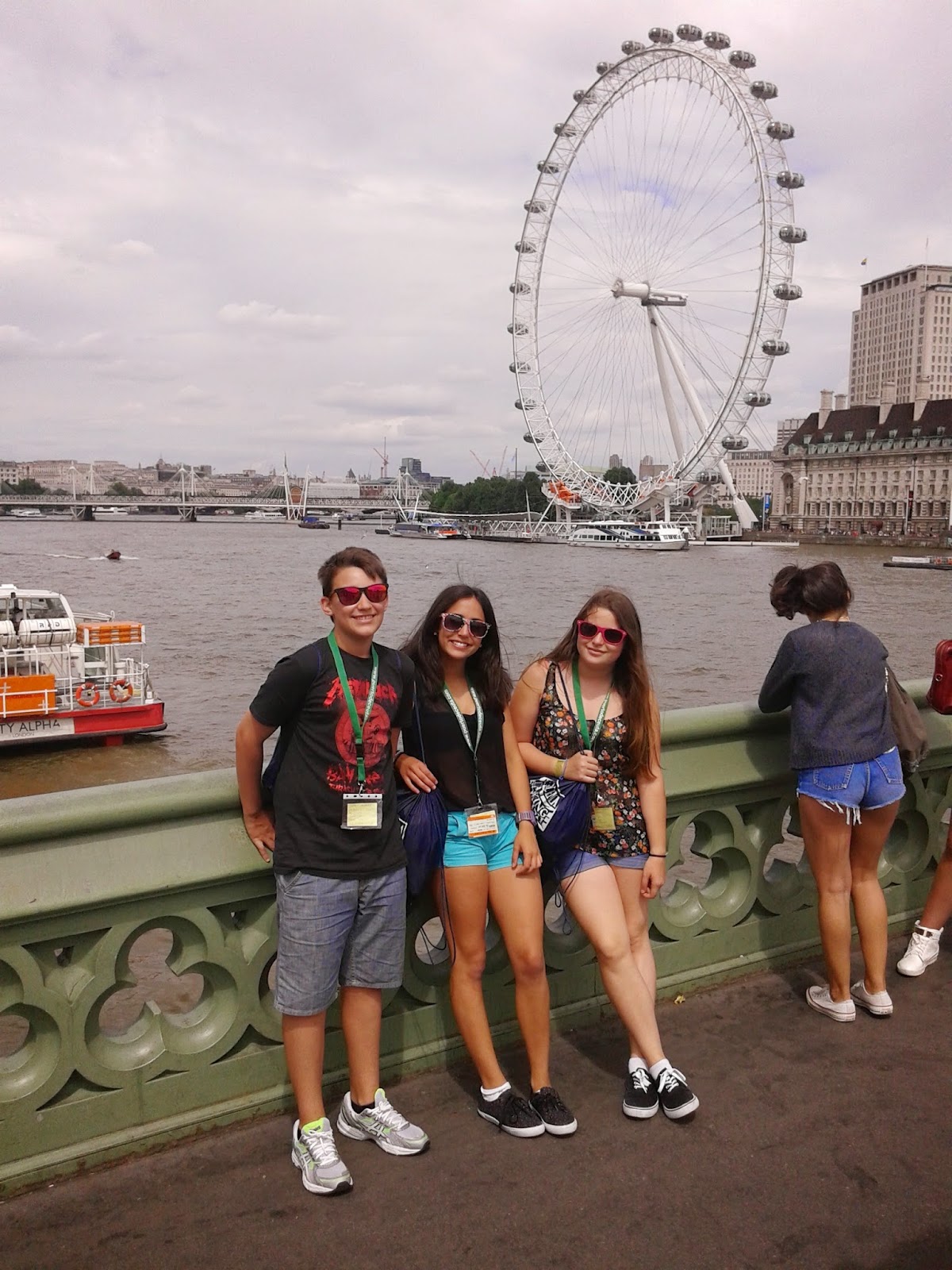 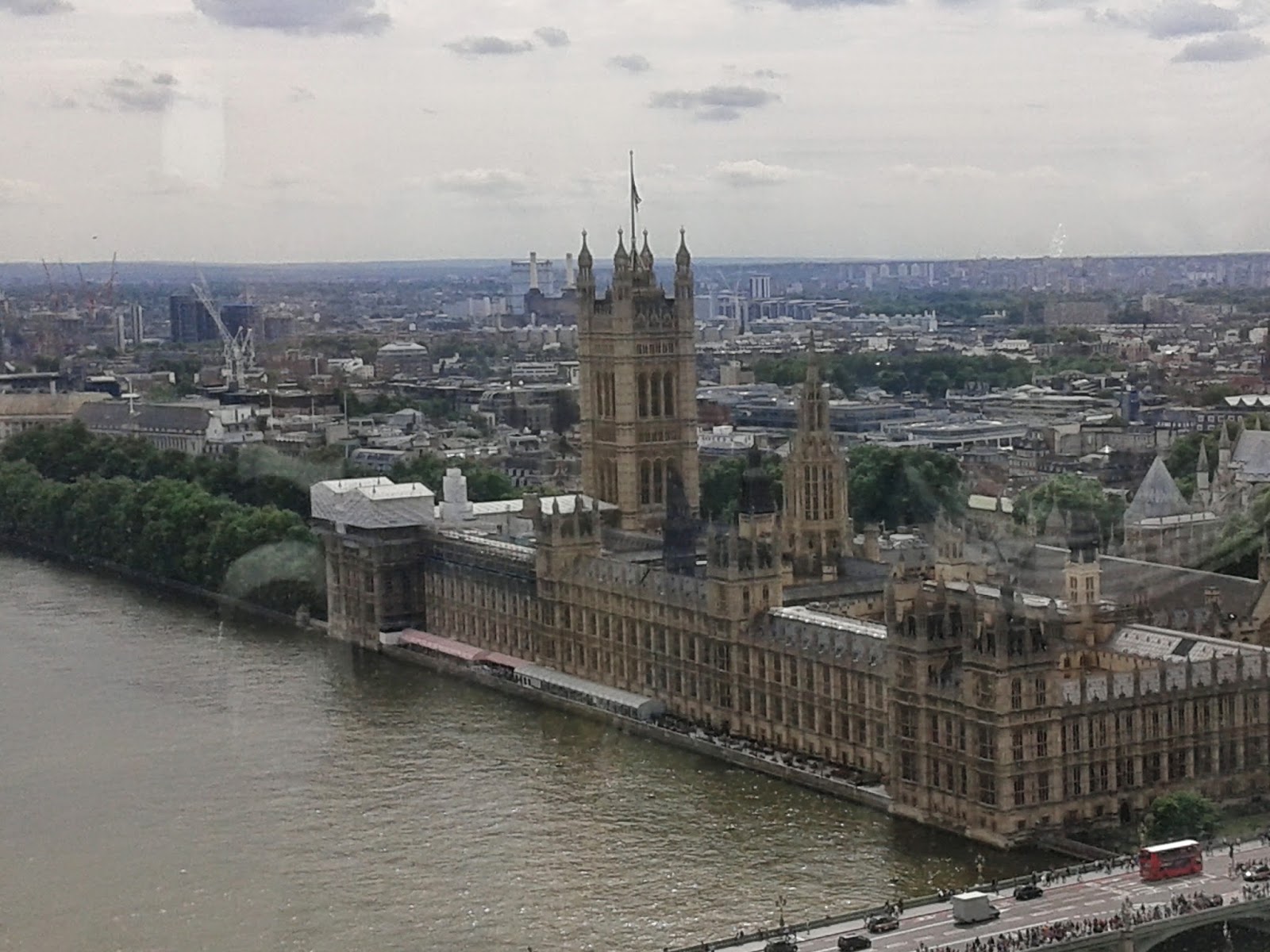 Leicester Square is a pedestrianised Square in the West End of London.
In this area, there are a lot of cinmeas and theatres. Leicester Square hosts the majority of British movie premieres.In the evenings, the square become extremely busy. Many if the tourist spend their time at clubs and bars.
You can also see some statues like William Shakespeare has a foundation in the centre, Charlie Chaplin and Isaac Newton have busts near by the centeral garden.
Picadilly Circus is a busy square in the heart of London. It is a famous for the fountain called Shaftesbury Memorial FOuntain which stands at the center of the Circus.
On the top of the fountain there is an Eros statue.The fountain was made in bronze, but the statue is made of aluminum. Picadilly means circle. Many people use the steps at the bottom of the statue as a meeting place.
Mayte. 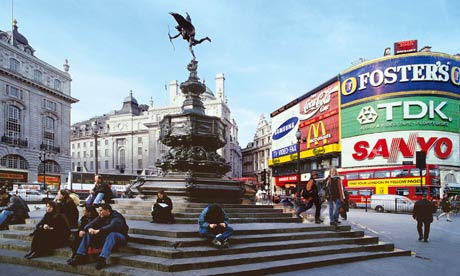 My opinion about London It is a very good place to visit  It has many shops and London is very famous all over  the world .  Big Ben clock tower  is very tall. The London eye is a good attraction but It doesn t  move very fast . My favourite monument is the blue cock  because  it is the most visited monument by the tourist . It is made of fibreglass where  this monument is here you will find four lions , a fountain and a Nelson Colum . Buckingham palace is one of Queens homes Every day they have the Changing of the Guide ceremony . At the national history museum I liked the dinosaurs exhibitions. Dinosaurs were my favourite  because I like them all . In the other halls there are pigs , elephants and a massive whale  that lives  in the water .London is a exciting  place  to  visit with many land  marks. I recomend that
when visiting England you see London.