On Monday we went to "St. Chad's High School". This school is special because it is mixed. It is Catholic and Church of England. It's speciality is in teaching modern languages. They learn French, German, Polish, Spanish and Chinese.

Our first impression was that it's so big, It's about 4 times bigger than my school. It has about two thousand people. There's a different subject on each floor or even a block dedicated to Sciences.

Secondly we were amazed on the different subjects they're able to study, for example cooking, design technology, child care, textiles and expressive arts. 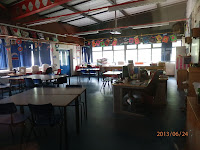 Thirdly there are many after school activities. There're a variety of sports such as fencing, sailing and golf. Also you can do dancing, journalism and drama.

Another important point is the amount of resources the school has. The students do a lot of hands on (practical work) assignments.

In Science they learn by doing experiments. They have computers in all the classes. 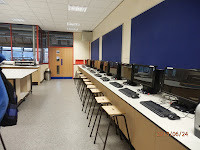 In the music department, there're lots of instruments which you can borrow to learn how to play them. During the year they put on musical performances. Also you have the posibility of recording your own music or even make your own film.

They told us that all their text books are provided. We have to buy ours. This year our books cost us 200 euros.

Also, you can buy the stationary you need in the school shop.

At lunch time the children eat in the school canteen. They don't use money. They put their finger on a machine which recognises their finger print. The machine takes the money out of their school account then  they are able to have lunch.

This is the second time I have been  to St.Chads. I quite like this High  School. Their  facilities are great.
They  do more interactive work than I do at my High School. I would really like to have gone to this High  School .


I have gone to St. Chad's for two days and we have gone to different classes.
I think this is a very big school . It keeps the pupils safe because it has a lot of security such as doors which open and close with security card system or finger print system so that you pay for the food in the canteen. As it is very big, it has laboratories for all the subjects like physics, chemistry, biology... The school helps the pupils with their learning because the Goverment gives them their books which means they don't have to buy them like I do.
I have gone to different classes at St. Chad school. But the class which I preferred  was about religion. This class was different than in Spain. Here they teach different religions and shows the difference between them which is really very little. I think that this is a good way to show religion because it helps the students choose what they belive in. During the class , the teacher introduces a topic then they talk about it. I think that this very respectfull.

I would like to discuss the science class we attended while visiting St Chad's school. This class was very enjoyable because we were involved in an experiment. The teacher talked about energy and gave us two equations for the experiment. The experiment consisted of calculate human power. We lifted 1Kg up and down 50 times and then we put this into the equations to give us the amount of power we generated.

Today is 9th July. It's is the first day that I've been to Chad's High School. It has been a nice experience because all the pupils were friendly and they said ''hello'' yo us.
Lucias and I met a lot of friends in the spanish lesson. The level was low because these pupils have learning problems.We talked about requierements and education system.
Finally , today is 10th July,the last day. We went tp Religion's lesson and we watched ''Invictus??.

Today when we finished the our "Break time" we went an English ckass. On the table there were some worksheets a fill in gaps Shakespeare about life. When we finished the exercises the teacher put on the screen a film called "Romeo and Juliet" we couldn't finish the film because there wasn't enough time . The film was a modern versión of Romeo and Juliet . It was a soppy film .
Publicado por Letty en 8:00