Chester is one  the richest city in Britain for archaeological and architectural treasures preserved to this day from the time of the Roman occupation.
Chester began when the Romans built a fort next to the River Dee about 75 AD.
The Roman fort was called Deva. After the nearby river.
Soon a small village grew up outside the fort at Chester. The soldiers would buy   the civilian's goods  from their market. Roman Chester was also a busy little port and luxuries such as wine and finely made pottery were imported.
In Roman Chester there was a large amphitheatre were people were entertained by gladiators or by cruel 'sports' such as cock fighting and bear baiting.
However in the 4th century Roman civilisation began to break down. In England people left the towns like Chester and they were left almost completely abandoned by the Danes and Saxons  by 900. 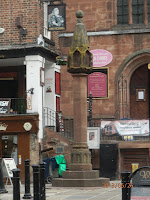 1º- High Cross:
In the middle of the street there is a sandstone pillar with a lantern head. This 15th century Cross marks the centre of the Roman fortress. The four main Roman streets go from the cross to the main gates. 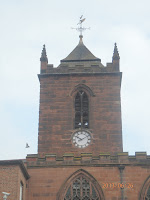 
3º- The Rows:
Most of the black and white buildings in Chester belong to the Victorian revival style. Chester is a splendid example of this style the most famous being The Rows. It´s a covered way walkways full of shops. The Rows is from about the 13th century. Wealthy merchants in the Middle Ages built magnificent town houses. The shops have always been a fantastic place where fine goods have been sold. 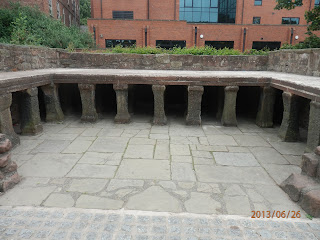 4º The Romans Baths:
Here the remains of the hypocaust, the underfloor heating system which heated the water for the baths. 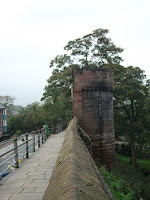 6º The Roman Walls
The original walls were built  of Wood in 79 A.D. Between 90 and 120 A.D the Romans replaced the Wood with Stone which we can still see today. Because of  the  Viking and the Saxons  they extended the walls. These walls have been  repaired many times.


7º Roman amphitheatre in Britain
Here,8000 people watched  animals fights public execuctions and gladiators combats.The amphitheatre is the largest in Britain. It´s from the 1st century.It was used as a training ground the Roman troops as well. 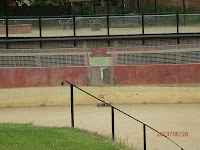 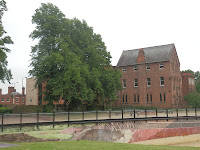 It was designed by Penson to honour the Grosvenor family. All along this street are some superb examples of Victorian timbered (wood) revival.

This was the Town House of the powerful Stanley family who where in charge of the Watergate which was the entrance to the port , so they made a  lot of money .The palace has a beautiful Elizabethan oak gallery reputedly haunted by the ´Grey Lady´ and the executed Royalist. 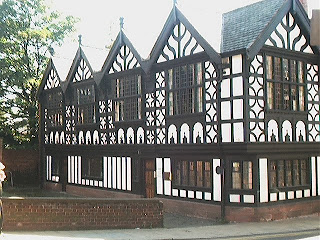 Chester Racecourse, is  known as the Roodee." Roodee” is a version of "Rood Eye", meaning "The Island of the Cross".  In the centre of the field is a raised mound which is decorated by a small cross known as a "rood". It is from this that the race course gets it’s name.The first recorded race at the ´Roodee Fields´ was in February 9th 1539, in the time of Henry the Eighth.
It is the oldest racecourse in the country, organising horse racing here in 1539.
In Roman times this was a busy harbour / port full of ships loading and unloading goods.

Before the cathedral there was an Anglo-Saxon church.
In 1541 it became a cathedral. The cathedral was modified many times between 1093 and 16th century.
It´s made of red - sand stone it has amazing stone glass windows. 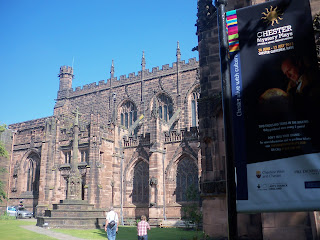 13.The River Dee
The name Dee comes from the Roman word Deva which means goddess.
The Dee was known  as one of the world's great salmon rivers. Since the 17th century, anglers
( fishermen )  have been sport fishing on the river for its famous  salmon. Victorian salmon anglers enjoyed some of the finest fishing in the Dee's  history.

The River Dee is a 70-mile (110 km) long river . It flows through Wales and England and also forms part of the border between the two countries.

Along the northern, City, bank of the river is the “Groves”. A paved promenade complete with bandstand, cafés, restaurants and public houses. Here you can go on  the river cruises, or on  a motorboat, a rowing boat or a pedalo. 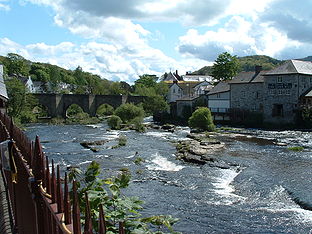 As you come to  the end of the Groves you will hear  the roar of water rushing over the weir  ( A dam placed across  the river ) .There is a  magnificent sandstone bridge crossing the river. It has  seven unequal arches which were built about the year 1387. Before this it was a wooden bridge and a pre-Roman  crossing place.