An unusual experience in Morocco ( story )

Last year I was in Morocco. It was an incredible experience. I stayed in a hotel far away from the desert. I saw a wonderful camel which had a hump. The camel seemed exhausted because it was under the sun with a huge ugly man sitting on top of it.The man who had an enormous belly came up next  to me and fell on the sand. He smelt very bad. I helped him to get up. After a glass of water he felt better. I invited him to my hotel to have a shower. He refused because he had to feed his camel. So I went to my hotel alone. On arriving I saw a poor woman selling souvenirs. The woman told me that her souvenirs had been stolen. As it was impossible to help her I left. Later as I was bored I went to the town centre where it was very busy. I looked for souvenirs to take home to my family. On the way back to the hotel I stopped off at a Mosque. I entered and I saw the same man who I had met earlier. 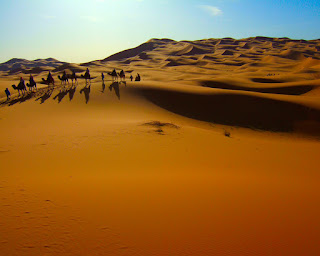